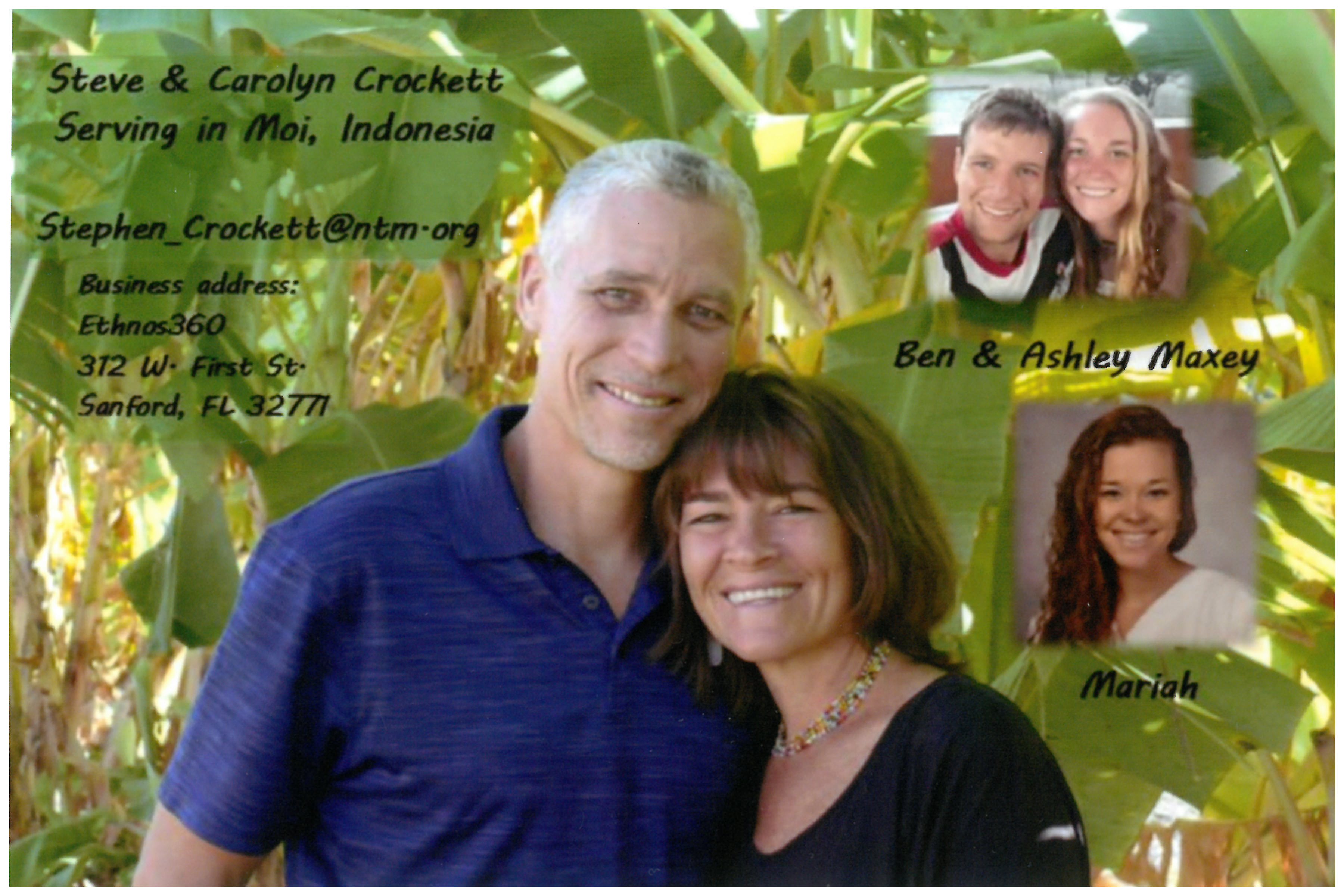 Stephen and Carolyn Crockett are currently serving in Asia Pacific. There they are working among the Moi people, a small language group of about 1,000 people. They are working as church planters and are involved in Bible translation, Bible curriculum development, Literacy as well as medical and some community development.

Their passion for reaching the unreached began years ago during their childhood where they grew up as missionary kids overseas. Stephen’s parents worked in Papua New Guinea and Carolyn’s parents worked among the remote people group called the Lauje. Both of them have vivid memories of the impact of the gospel on people whose lives were filled with fear of evil spirits, sorcery, and hopelessness. The transformation of remote and isolated peoples moving from darkness to light created a burden in them to take that gospel to others who have never heard.

In 1998 Stephen and Carolyn along with their daughters Ashley and Mariah moved to Indonesia, a country of over 850 different language groups. After a year of Indonesian language study they began doing survey trips to remote locations where they eventually made contact with the Moi and began working with them. The years from 2000 to 2004 were spent in Moi language and culture study. After that they began the literacy program, Bible translation and curriculum development. And finally in January 2006, after two months of teaching, eight Moi accepted Christ as their personal Savior.

The Lord has been faithfully building his church among the Moi ever since. In 2015 we were able to ordain our first three elders. As of 2019 there are over 300 believers. Of these believers there are around 15 Bible teachers who have been trained to use the Bible lessons. We are praising the Lord for these men who continue to grow and the Lord and desire to see others grow as well. Stephen and Carolyn are encourage with the process that is being made, although they sure would appreciate your prayers as they continue to disciple the Moi especially in the area of marriage and parenting.  They also covet your prayers as they continue on in Bible Translation and Curriculum development.

From 2015-2021 they have seen a number of significant things fall into place as they consider that the day is soon coming when they will be phasing out of their work there.

We are empty nesters now. Both girls are doing well. Ashley and her husband Ben are back in Indonesia with C.A.M.A. and Mariah and her husband Isaiah are currently in VA but with plans for overseas service somewhere.